Re-release of the debut single on Pinnacle Records.

There are two different sets of labels for this release (see pictures below). The first copyrights C.I.D & B.I.C (sic) to Nasal Tunes and production to Sparta Florida, as per the original City Records release, the writing credits are the same as the original and as credited on the sleeve (though B.I.C is Harper & Garret). The second misses off Nasal Tunes and Sparta Florida, it also gives the full writing credits of Live In A Car as Harper/Lions (sic)/Garrett (sic)/Slack with C.I.D and B.I.C having Charlie's and Nicky's initials added.
There is also a small difference in the sleeves with the shape of the cut-out on the back of the sleeve at opening edge, one is a short curve and the other is long shallow.

It's not known why the labels were changed but it's fair to assume that the first label info was copied from the original City Records release and the second label was due to the amended writing credit info on Another Kind of Blues. 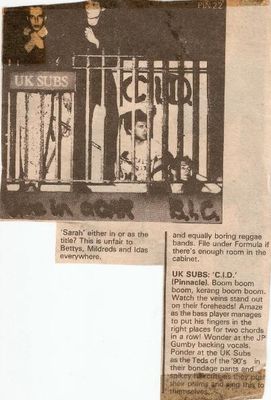 To view the next UK Subs single release: CLICK HERE