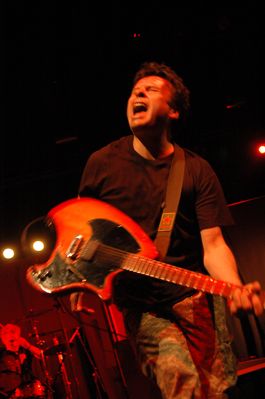 There's something about an iconic shape that resonates with me. Something designed just so... perhaps by intent, perhaps with some luck and/or coincidence. The Ovation Breadwinner is such a design.

It's a guitar that, while so very different, was so right. There are conflicting stories about the beginnings of the guitar in the early 70s, but what is certain is it was one of the first guitars with active electronics.

Ovation entered the electric guitar market with the storm series of semi acoustic guitars. The bodies were built in Germany by Höfner and necks by Ovation.

The Typhoon, Thunderhead, Hurricane, Tornado and Eclipse were all in the Gibson 335 vain, but even then had the distinctive headstocks still used today. The company exited the electric guitar market in the mid 80s, leaving just a catalogue of mostly acoustic guitars in production. Ovation's founder Charles Kaman had previously worked on helicopter design and used various aeronautical materials like Lyrachord on the famous bowl back Ovation acoustic guitars.

He brought these innovations forward to the solid body guitars beginning with the Breadwinner.

The Breadwinners were in fact Teflon coated Mahogany bodies, with the superb 24 fret necks, also featured on most of the other Ovation solid body guitars. (The Preacher, UK2, Viper).

The Breadwinner, and its upscale sister the Deacon, are beautifully balanced instruments equally comfortable held in a classical, folk or rock position. The Deacon has a natural wood finish and some extra binding, but it is ostensibly the same.

I don't recall ever using a breadwinner or deacon with the Subs, but I liked the balance so much that I asked John at Gordon-Smith to build me two custom guitars for the road which I've toured with many times. These copies have the guts of the Gordon-Smith GS1 but the shape of the Breadwinner. The headstock shape was my idea, with a 4 - 2 machine head configuration.

I also had him put tremolos on them to bridge a bit of gap between the 'Gibson' sound and a Strat.

Just for kicks, John also built me a Breadwinner twin neck 12/6 which, as far as I know, is the world's only twin neck breadwinner.

I own three original Ovation Breadwinners. Two are early white models, with the wide single coil pick-ups and 'bad teeth' bridges (off white nylon molars). One being quite early with no emboss on the battery plate on the back. The third is a later black model with the mini humbuckers and brass bridge. I bought this one with no active electronics and converted it into a midi ready guitar.

I have two Deacons, both in first class condition. One is a six string, in a very dark sunburst, with the early single coil pick-ups - again with the 'bad teeth' bridge, the other is a 12 string. The 12 string Deacon must be one of the most underrated guitars around.

Again 24 frets this time on a graphite reinforced neck, active electronics and that compelling ergonomic shape. It features the later mini humbuckers and brass bridge. The range of sound is huge, from icy to bell like, from thick and warm to out of phase jangle.

Ovation seemed to be playing the middle ground between Gibson and Fender. I own an Ovation Viper, which while shaped a little like a Les Paul, has a more Fender sound. In looking for that market niche, I think Ovation stumbled upon a classic.

(In fact Eastwood guitars have just issued a line of Breadwinner copies.

They have kept the active electronics and basic shape and tone control configuration, but with a modified headstock).

While not an element in the sound of the U.K. Subs, I have used these guitars in various projects, particularly the Deacon 12 which is occasionally on loan for various recording projects - returned to me with universal praise.