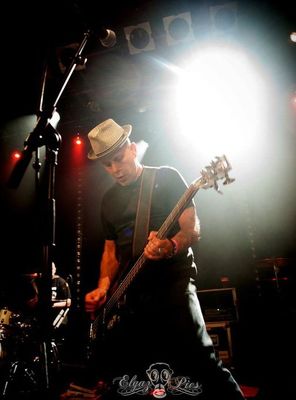 Welcome to Paul's 2011 tour blog, in which Paul will be detailing what daily life is like whilst touring with Monica and The Explosion.

In his blog, you will find descriptions of venues, support bands, and of the various people that Paul meets along the way.

Paul will also share various photos from his travels

The first entry for this month is at the foot of the page, with the latest entry at the top!

Bit of an anticlimax this – but our escape plan worked like a dream.

The van we followed out of the confines of Chartres’ old town didn’t slow down, or worse, stop, as it passed over and beyond the retracted bollard. I can’t tell you by what margin we made it because the Alfa’s rear view mirror had fallen off right at the start of the trip adding to the drama. But there was no sickening sound of metal on metal, just the sound of two people laughing somewhat hysterically as we sped out of the town, into the night, and back to the hotel.

Our return ferry wasn’t until 6pm so we headed to Rouen for lunch and some sightseeing. I’d been to Rouen many times before, usually on shopping trips when we needed to buy something for the house. With time to kill we had a chance to explore.

Rouen, the historic capital city of Normandy, is probably best known as the place where the 19 year old “Jeanne d’Arc” (Joan of Arc) was executed in 1431. Joan, an uneducated peasant girl from eastern France asserted that she had visions from God that instructed her to recover her homeland from English domination late in the Hundred Years' War, which was enough to convince the uncrowned King Charles VII to send her to the siege of Orléans as part of a relief mission. She gained prominence when she overcame the dismissive attitude of veteran commanders and lifted the siege in only nine days. Several more swift victories led to Charles VIIs coronation at Reims and settled the disputed succession to the throne.

After her capture, Charles VII was largely condemned for failing to intervene on her behalf. Her subsequent trial for heresy was irregular on a number on points and shows the Church and English monarchy in, quite frankly, a piss-poor light. No real surprises there, wasn’t it always so with those two fine pillars of the establishment?

The surprising thing was that we hardly came across any mention of the “Maid of Orléans”, but we did come across some fine buildings despite the fact that forty-five percent of the city was destroyed during World War II. Even the famed cathedral was damaged by allied bombing. Still, what remains is a pretty impressive collection of half-timbered houses through which to stroll.

Finally… having driven over 3,000 miles around France in the last few weeks, I’ve come up with a hopefully useful suggestion to help French car manufacturers cut production costs: “Why not make indicators an optional extra on all new vehicles?” The French, after all, have no great appetite for them. Just a thought… 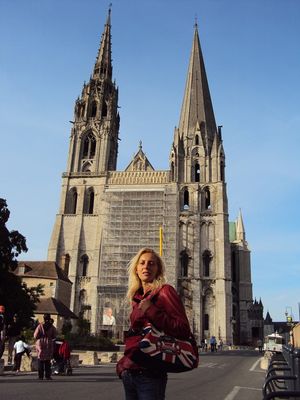 Whatever your perspective on religion is, and I’m a pretty staunch atheist, you cannot help but be impressed with the sheer size and grandeur of Chartres Cathedral. It dominates the landscape for miles around.

All I could do, as I stood before it gob-smacked, was to mouth the words “Fuck me… will you look at that?” And that was from someone who’d seen it many times before.

That the building survives in its present condition is thanks largely to one man.
While the city suffered heavy damage by bombing in the course of World War II, the cathedral was spared by an American Army officer who challenged the order to destroy it.

After he returned from his reconnaissance, he reported that the cathedral was clear of enemy troops. The order to destroy the cathedral was withdrawn, and the Allies later liberated the area. Col. Griffith was killed in action on August 16, 1944 in the town of Leves, near Chartres. 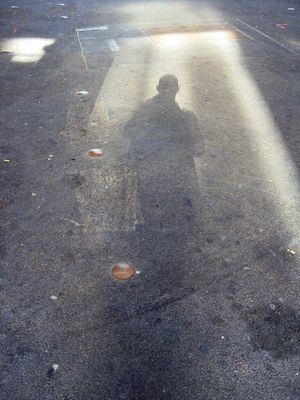 Our venue was “Le Marche aux Legumes”, in the shadow of the cathedral. With a Swede on guitar and a turnip on bass you’d think we’d be perfectly suited to doing a show in the vegetable market…

The gig was arranged by an old friend of mine, Pascal DeMontourneur, a Subs and Flying Padovanis fan. Pascal now runs his own promotional company www.montourneur.com.

The market was situated in the heart of the old town and almost impossible to get to by car; especially from the direction we approached it. Thwarted by the river Eure, we had to park and carry our guitars the last 400 metres up steps and a steep slope that left me sucking up lungfuls of air. That still left the problem of the amps, so Pascal came back to the car with me and we embarked on a twenty minute journey which seemed to almost take us out of the city. As we made our final approach, we headed down a road that had those pop up bollards that prevent unauthorised vehicles from entering.

The gig was a slightly strange affair, with people stopping to watch as they wandered by. Children came to dance in front of us. We also attracted the town drunk, who treated us to the most remarkable exhibition of out-of-time dancing you’re ever likely to see this side of Glasgow. It was all strangely enjoyable.

After the show, and after a quick drink, Pascal departed pretty sharply. I suspect he disappeared to watch the Champions League Final, whilst we went and dined handsomely at an Indian restaurant a stone’s throw from the cathedral.

After the meal we returned to the car and there was one last drama to deal with. The bollard that was down earlier was now up, as were all the bollards that encircled the “Old Town”.

As it was late there was hardly anyone around to seek advice. Then, whilst weighing up the various options, we spotted a van that was just about to leave so we decided to follow him out bumper to bumper, and at speed, before the post rose up again to trap us for the night.

Now I’m sure if you’ve seen this sort of thing before on YouTube, your natural reaction would have been “what a complete twat, ha fucking ha”.

And you’d be right!

Well? Did we make it in time? Or, to borrow a line from Bob Dylan, will the car be left balancing “like a mattress on a bottle of wine”? I guess you’ll have to tune in again for the next thrilling episode… which, by the way, will also include an enervative suggestion to all French car manufacturers.

Wow! Can it really be three and a half months since my last blog?

Well they say “Time flies when you’re having fun”, and so much has happened since then. Where do I pick up the thread? I still have the last week or so of our Australian tour to write about. And since we returned from that epic trip we’ve been to Ireland, the Netherlands and France, and now we find ourselves back in France.

Blogging requires time and discipline, but time has been at a premium recently. If we’re not touring or playing then I’m hard at it with the day job, trying to earn enough money to hit the road again. Not that I’m complaining, it’s a great life.

We’re in France for our second visit this month, this time playing in Nantes (two nights) and Chartres. Our previous trip, a couple weeks ago, also took us to the Netherlands for two gigs. Having become slightly disillusioned with the UK scene and the contempt shown towards bands back home, we’ve turned our attention to mainland Europe. So far it’s paying dividends; wherever we’ve been we’ve been greeted with genuine warmth and hospitality, a refreshing change from the apathetic attitude prevalent on the domestic circuit. 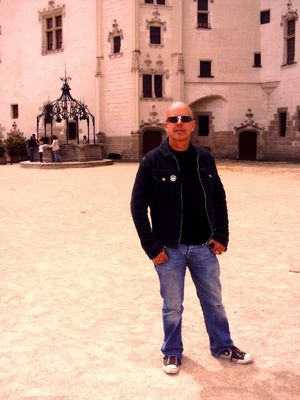 Nantes is a city of great culture, highlighted by “Estuaire”, a contemporary art exhibition that takes place every two years between Nantes and Saint-Nazaire (along the Loire estuary). The biennial exhibition gives, for a three month period, worldwide artists the opportunity to create artworks and installations along the Loire River. The overall aim of “Estuaire” is to inspire a different perspective and appreciation of the local environment.

We only saw a couple of the installations, as it would have required a full day to see them all, and there was much more to discover about Nantes. Such as the Royal de Luxe, and here I’m indebted to my friend Jessy Lotti who sent me the following information.

“Royal de Luxe is a French mechanical marionette street theatre company. They were founded in 1979 by Jean Luc Courcoult. Based in Nantes, the company has performed in France, Belgium, England, Germany, Iceland, Chile, Australia and Mexico.
The Sultan's Elephant was a show created by the company, it involves a huge moving mechanical elephant, a giant marionette of a girl and other associated public art installations. In French it was called La visite du Sultan des Indes sur son éléphant à voyager dans le temps (literally, "Visit From The Sultan Of The Indies On His Time-Travelling Elephant"). The show was commissioned to commemorate the centenary of Jules Verne's death, by the two French cities of Nantes and Amiens, funded by a special grant from the French Ministry of Culture and Communication.”

We didn’t get to see the elephant but we were fortunate enough to watch a parade of the little girl and her dog. The dog mysteriously appearing the day before sealed in a block of ice, and deposited outside the cathedral.

We also had time to visit Le Chateau des ducs du Bretagne. Built initially by Francois II, the last Duke of Brittany and continued by his daughter Anne twice Queen of France, the chateau is a Breton fortress encircling some remarkable 15th and 17th century buildings with richly carved facades. OK - history lesson over...

We played two shows in Nantes, both arranged by Richard Royce, lead singer and guitarist with local band El Royce. I met Richard last year when I played with the Subs at Le Ferrailleur in Nantes, and El Royce were the support. I blogged about that gig at the time (see entry Sunday 25th April 2010), but it’s worth repeating that not only are El Royce a great band but also a great bunch of lads. So it was a real pleasure to see them again.

The first gig was at Le Dockyard, about five doors down from Le Ferrailleur. Two, forty minute sets in front of a modest - though appreciative - crowd was just the sort of workout we were looking for after a 10 day gap between shows. The second gig was a last minute arrangement instigated by Stephane, the El Royce bass player who had been unable to come to the first show. The venue was a small bar called “Mon Soleil” run by a cheerful, friendly owner called Carole. What a great night it turned out to be, a real music crowd out for a good time. Once again a big thank you to everyone involved, especially Richard for his kind generosity. Hope we can return soon…

Click the CD cover photo to purchase the totally fabulous Monica and The Explosion CD, with Paul Slack on bass. You will be taken to the secure Time & Matter Recordings Big Cartel site.
THIS IS THE ONLY U.K. OUTLET FOR THE CD, WITH A SMALL DONATION ALSO GOING TO CHARLIE'S CHARITABLE CAUSE.
Go on - you know it makes sense - give yourself a real new musical treat! 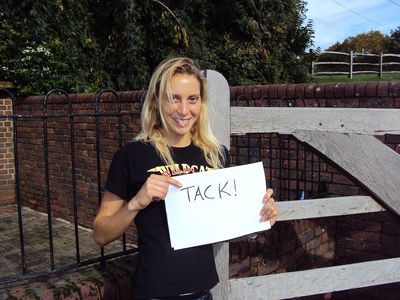 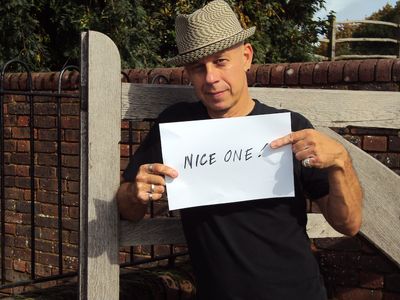