NEW VERSION TO APPEAR ON A SINGLE AND ALBUM

As T&M previously reported back in October 2012, ex-Subs bassist Paul Slack has recorded a new version of the U.K. Subs classic song ‘Warhead’ with his friend Manu Castillo and his band Tio Manuel. The new version, which Paul has revealed is a completely different take on his legendary bass-line-led Subs version from over 30 years ago will appear on an EP, which will be available as a download in March and on vinyl in April. It will also be the opening track on the Tio Manuel album which will be entitled ‘4 Stones’, with the whole album available as a download in May.

Paul also revealed that he “used (his) Travis Bean TB2000 on the new recording, which is the same bass that I used for the original recording all those years ago.”

Paul further revealed that he also sang backing vocals on the new 'Warhead' as well as providing a voice over in the song's fade out.
The album is on 'La Fugitive' and distributed by 'Believe', and you can hear samples of both 'Warhead' and 'AK 47 Blues' HERE.

T&M joint web-ed Mark chatted to both Manu and Paul in order to find out more about this exciting new collaboration.

Manu “I met Paul Slack while I was playing guitar for the French band La Souris Déglinguée in April 2010. Paul was touring with the U.K. Subs and both bands played in Callac, France at a place called Le Bacardi. Backstage after the show I talked to Paul and Jamie Oliver about music and many other things. 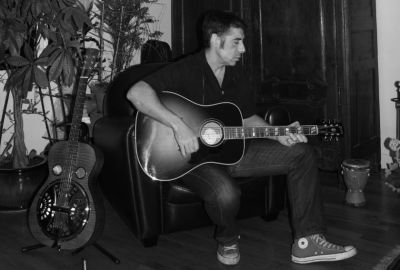 Two days later, the Subs played in Paris, where I live, and Paul and Jamie invited me to the gig. I guess our friendship started at that time, but we didn't have any idea of what would happen two years later, when we met again!

At the beginning of 2012, I sent Paul a message, via his Facebook page, basically just to say hello. Paul was touring in France with Monica & The Explosion and looking for gigs. He asked me about opportunities in Paris, and I booked a gig for them at Les Combustibles, and asked friends in Limoges to book something there at the same time too. I hadn't played with my project Tio Manuel for maybe 2 years, so we decided to start again with a light acoustic version (2 guitars) as support band for Monica on those two gigs, and four more because Paul and Monica found more gigs in France for both bands. So we started to play together, and the desire to write new songs - acoustic songs - came again for me.
So I wrote a new album asking two great musician friends of mine to work with me on it. I then talked to Paul about the idea of recording ‘Warhead’ in an acoustic Latin style with Dobros, brushes etc. And Paul accepted! And we did it!

We recorded the whole album in November and December in Paris (La Fugitive Studio). Mixed and finished it in January, and mastered it at Sound Performance Studios in London on the recommendation of Paul and Chris Musto.”

Paul: "I first met Manu Castillo in the Breton town of Callac whilst I was touring with the Subs in 2010. Manu had just driven non-stop from Florence, where he was on holiday, just so he could perform with the French punk outfit La Souris Déglinguée who were playing on the same bill.
We struck up an easy friendship right from the start and spent some time together after the show talking about music and life in general. We parted with a promise to hook up again in Paris two days later. Manu was (and still is) the original guitarist with Wunderbach, another French punk band.
In Paris Manu told me about his own project Tio Manuel and his plans for the future and we talked in vague terms about playing together sometime. However, almost a couple of years passed before we spoke again. Then came some combined MaTE/Tio Manuel shows in France during which our friendship became well and truly cemented. 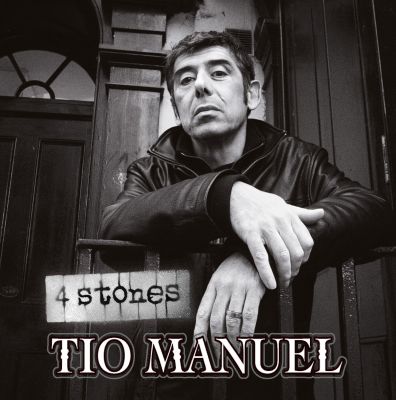 When Manu asked me if I'd like to play bass on an acoustic version of ‘Warhead’ he was planning to record for his forthcoming ‘4 Stones’ album I readily accepted. I was eager to see what could be made from the song using a completely different approach. I knew that part of the song's popularity was due to the bass line but the challenge for me was to adapt it to fit a much different style of music whilst still retaining some sense of the original. Whether or not I succeeded is not for me to say.
Travelling to Paris in November to record the song was a hugely enjoyable experience. I realise that the new recording may not be everyone's ‘cup of tea’ but for me it was a worthwhile exercise and a way of reacquainting myself with an old friend from an important part of my life."

Paul has recently been playing with the Allegra Shock Band, and they are playing a gig on Friday 22 February at The Islington in Tolpuddle Street, London. Doors are at 7pm with the band due on at 8.15pm. Allegra has stated that this will be the last time for a while the band play live and that they are due to go into the studio sometime in March.
The Allegra Shock Band are a 3 piece band featuring Californian singer-songwriter Allegra Shock, Paul on bass and Chris Musto, who is Paul's old bandmate from his Flying Padovanis days.
Paul's other music involvement is with The Penny Black Remedy who are currently pre-occupied with completing work on their eagerly awaited new album, of which the title will be announced over the next couple of weeks.
However they will be performing live next month as they build up to their first French tour which starts on 5th April. One of the dates already confirmed for March is the 15th when they will be appearing at The Lexington (King's Cross, London) at the launch party for the new album by the band Tankus The Henge.
Paul will be keeping T&M informed of future developments with Allegra as well as his involvement with The Penny Black Remedy, in what should prove to be another exciting year in the musical adventures of the legendary Subs bassist.