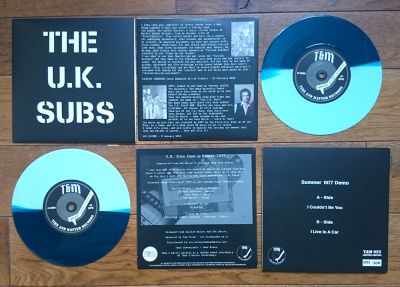 It's here! T&M 023, and this really is the ultimate U.K. Subs rarest of rare recordings!

AN ESSENTIAL MUST-HAVE FOR ANY U.K. SUBS FANATIC AND/OR PUNK HISTORIAN

This amazing two track 7" single release boasts never before released tracks that have seldom been heard since they were recorded in the summer of 1977.

...this was the demo that Nicky Garratt heard and "was impressed" by before deciding on joining the band in October 1977.

Featuring the Harper classic 'I Live In A Car' and a cover of John Presley's 'I Couldn't Be You', both of which would remain standards and popular favourites in the Subs' live set for the decades that followed, you will be amazed at how well formed these songs are, even in these very first studio recordings, made circa July/August 1977 at The Tooting Music Centre in London.

Taken from a "third generation cassette" that had been in the collection of Rob Harper, who prior to joining the U.K. Subs had been the drummer for The Clash during their infamous December 1976 'Anarchy In The U.K.' tour with the Sex Pistols, these incredibly rare Subs recordings have been brilliantly mastered by Tim Turan at Turan Audio and despite various drop-outs in the sound quality on such an old recording, especially taken from such a delicate format, they have been superbly and painstakingly restored to the highest quality possible for this historic recording and release.

What more could a Subs vinyl junkie wish for?
This release is strictly limited to 500 hand numbered copies on 7" dual blue coloured vinyl, and is issued in a classy matt finished sleeve as well as an inner sleeve boasting liner notes from both guitarist Richard Anderson AND drummer Rob Harper.

In yet another amazing first for the Time & Matter team, this is the first time that Anderson has spoken or written about his time with the band.
The inner sleeve also features the only known photos of this inaugral Subs line-up and the 7" single's striking artwork utilises the font from the t-shirt that Steve Slack can be seen wearing onstage in 1977.

Side A: I COULDN'T BE YOU
Side B: I LIVE IN A CAR
U.K. Subs line-up on these recordings:
Vocals & Harmonica: Charlie Harper
Guitar: Richard Anderson
Bass: Steve Slack
Drums: Rob Harper

Later this year, to complement this release, Time & Matter Records will also be releasing the band's second demo (T&M 024) on a 7" single, which was also recorded in 1977, featuring exclusive new liner notes from Nicky Garratt.