Below: Pictures from this gig by Time & Matter including support bands.
Click to enlarge

The following review appeared on the ROCK REGENERATION website

Archived on T&M below: 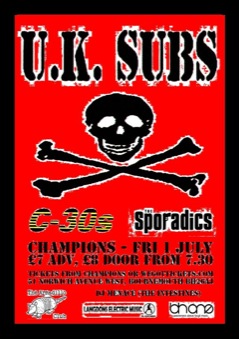 Its a warm Friday night in sunny Bournemouth & tonight is Punk Night! Bournemouth’s Punk fraternity is out in force to welcome the return of Punk legends UK Subs. Also on tonights bill are two local bands. First up are Dub/Ska Punkers The Sporadics.

Their aim is to get this crowd moving early. Shaun (vox) is cavorting the stage in a rallying call to all as he sings the opening lyrics to ‘Sick’. These guys are no strangers to Champions & have quite a following in the area & they get us in the mood with another of their ‘short’ titled songs D.S.P. Bimble (bass) is concentrated all night as his gaze barely leaves the stage-its hardly shoegazing tho, he doesnt stand still for a minute!

More crowd pleasers follow with the likes of ‘He Said’ & Rejects before Shaun dedicates ‘Freaks’ to ‘you lot & us lot,’cos thats wot we are!! A few skins among the crowd start dancing while the band grow more confident. Saul (drums) also seems to be enjoying himself,laughing & gurning throughout while Andy (guitar) confidently plays in his own no nonsense style. Shaun carries on bantering with the crowd & says they’re going to do a cover. Its not one this reviewer recognises so I wont pretend I know it! They end with ‘Ronnie’ to generous applause & duly set the tone for what will be a memorable night. 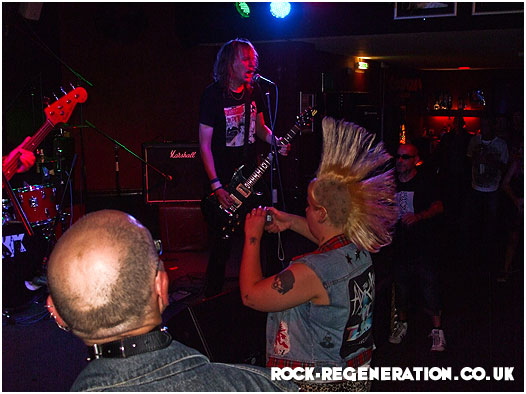 Second on are local Punk stalwarts C-30′s. Tonight’s set as with recent gigs has seen them take a more Grungier stance. Dinosaur Jr. comes to mind but one wouldn’t want to label them as a tribute just yet! Their whole sound is fuller & heavier on the earlier songs in their set before they return to the punkier songs like ‘Snakes & Liars’. Their gig isnt helped tonight when Andy (vox),frustrated by the soundmans efforts walks off stage mid-set bemoaning the amp volumes. After a brief vocal exchange with the promoter & sound guys he returns to the stage fired up & ready to resume! Live favourite ‘Wake Up’ gets the usual singalong before they return to the heavier material of earlier. Dom’s (drums) are always an eyecatching feature of their live work,his handspeed knows no bounds & tonight is no exception. Paul (bass) just plays along confidently, smiling throughout. They end on ‘Beachbum Baby’ to decent applause but Andy just looks happy to leave the stage. 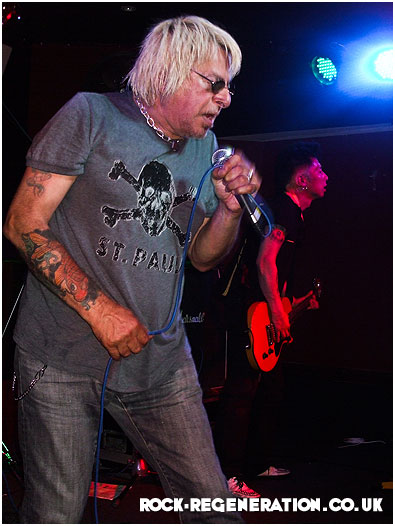 So, to the return of the UK Subs. The crowd has swelled to a near full Champions as the band take to the stage. Charlie (vox) launches himself into opener ‘Endangered Species’,the punks respond instantly with a mad pit ensuing. Tonight they play like their lives depend on it. While some Punk bands go for the ‘cleaner’ more professional sound (SLF),the Subs just play ‘faster’ & tonight is no exception. Jamie’s (drums) are ferocious throughout while Jet (guitar) is pulling shapes all night long. ‘Kicks’ carries on the mayhem within the crowd & live favourite ‘Emotional Blackmail’ gets the first big singalong.

Early numbers ‘Left For Dead’,'Rockers’ & ‘Keep on Running’ keep everyone happy alongside newer songs like ‘Creation’ & ‘Bitter & Twisted’. Charlie’s vocals are coherent for a man of his years but he pays tribute to ‘his brilliant band’ as he takes us ‘Down on the Farm’. He celebrates Alvin’s (bass) by announcing how he’s spoiling us with his ‘Thunderbird’ tonight. Alvin looks almost embarrassed,smiling nonchalently. More classic numbers follow in the shape of ‘Teenage’, Tomorrows Girls’ & ‘Warhead’ which gets another (extended) singalong. Early single ‘Stranglehold’ is greeted warmly by one & all as are ‘Disease’,'World War’ & ‘Party in Paris’. The band take a well earned break before returning to a ‘terrace-like’ chant of UK Subs,UK Subs….. They end with C.I.D.,Live in a Car, & ‘Lady Esquire’ to rapturous applause & I imagine everyone goes home happy. Punks not Dead,on this showing its alive & well!

C.I.D.
Live In A Car
Lady Esquire (it was actually DISEASE - ed)

Review By Ross Ferrone.
Pictures and Video by Chinners.

GIG PREVIEW here
Archived below though!

Tomorrow night the U.K. Subs return to Champions, nearly seven months after their last visit. Now, last time they came it was early December and bloody freezing. In fact the gig was on the verge of being called off due to the heavy snow and icy roads, meaning not only were punters struggling to get to the venue, but the Subs were too. But, make it they did, and well over 100 lucky people made it to Champions to watch what I heard was an amazing gig.

I say “what I heard” because despite promoting the gig, I was unable to make it, being bed bound following back surgery and feeling like shit on the medicine. Now, this time I’m fit, my back is strong and I can’t wait. It’s not often you can use the word ‘legend’ when describing bands or musicians, especially those playing at Champions, but Charlie Harper is just that having fronted the U.K. Subs for the last thirty five years. Prior to the Subs forming in 1976, Charlie was already long-established in the London R&B scene, but since their early rehearsals in Harper’s hair salon, using beat-up equipment stacked next to hair products, the Subs built up a following around their South London hometown, earning exposure through Brit press like Melody Maker and New Music Express, and making numerous appearances on Top of the Pops. Opening for the Ramones and The Police, the Subs went on to record seven consecutive top thirty hits in England from 1979 to 1981, including ‘Warhead’ and ‘Tomorrow’s Girls’.

Nowadays the U.K. Subs are performing more than ever, averaging 150 gigs a year, with no signs of slowing down. Why? Because they still love it, and fans all over the world still want to see them. As Charlie said in an interview last year with Safe Concerts…

“…the band just love performing, it still feels like the old days, if we weren’t even getting paid we’d still go out and do it. I mean, the guys all go out & play in other bands, I play solo – we don’t expect money for it but if someone gives us a few quid, that’s great! Or a few beers, y’know? We’d all do it anyway and we love getting up onstage, love performing and love trying to perform to the best of our ability – every night we try and do something that little bit better and better. I mean, I got one of those last night, y’know, “It was the best I’ve ever seen you” and the guy’s been to 60 odd concerts so it’s great, y’know? We never, kind of, try and rest on our laurels or just go through the motions, we never have that attitude, we just want to get better.”

Personally, I can relate to this quote from ’98, taken from the Subs site Time And Matter. Read it, it says a lot…

“People, people, people, get involved. Play your guitar, do your fanzines, take photos BE INVOLVED. One day it could all be worth something because it’s not only history but the future too. So live it, don’t just be part of the audience, participate.”

Support tomorrow night comes from C-30s and The Sporadics. Sticking to a feature heavy on quotes I’ll nick one from Andy Nazer’s facebook page. Like Charlie’s, it says it all…

Further to their 27/6/2011 post the 'Tales from Bradistan' Blogsite has today published a photo from their Middle Aged Punks photograhic project.

Charlie Harper is one of the most well-known and iconic figures in UK punk. At a remarkably healthy sixty-seven years of age, he still fronts the UK Subs, the band he formed way back in 1977. Despite me being a stranger and him undoubtedly being someone who has been photographed numerous times, Charlie greeted me warmly and happily engaged in conversation. He is still a notably down to earth man and could be seen mingling with fans at his recent Bradistan gig.

I was chuffed when Charlie agreed for me to take his portrait for my Middle Aged Punks series, although he would put many of the younger punks to shame with his remarkable energy.

Note:
Alvin's portrait for this project appeared on 6 July 2011 - click here to view