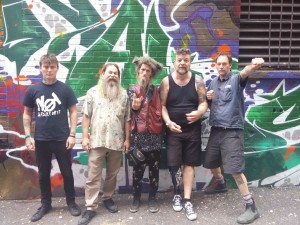 The 13th Floor website has just published a fantastic interview with U.K. Subs drummer Jamie Oliver, primarily covering his additional role as the drummer for SNFU.

However, this excellent interview also covers Subs stuff as well as interesting insights into Jamie's many other drumming duties for other bands...
The interview is by Tim Edwards, who runs Punk Rock Road Trips, supporting the live scene in New Zealand...
"...the Subs are more blues based whereas SNFU are a lot faster with more of a metal vibe going on in places. They’re somewhat different personally too though – the Subs are kinda reserved, they like their comforts like hotels, nice wines, smelly cheeses and all that shit, whereas SNFU consist of a blind nudist, a deaf alcoholic, a one legged former crack addict and a toothless Chinese faggot (his words, not mine). I think the only fucked up thing about me is that I’m English..."
You can read the full interview with Jamie on the following link...
http://13thfloor.co.nz/my-back-pages/jamie-oliver-the-13th-floor-interview/
The full article is also 'archived' below:

Tim Edwards sat down with drummer of the legendary SNFU Jamie Oliver!

Yep, actually I’m playing for both and also I’m drumming for The Izuna Drop, Louise Distras, 4ft Fingers and an Italian punk band called Clan Bastardo. I don’t understand a single word they sing because I don’t speak Italian. They could be singing the most racist, homophobic, sexist shit and I’d have no idea. Fortunately they aren’t that way inclined, but it’s kinda funny to think about it like that.

Q) How do you feel the two bands sit together musically? Or are they completely different vibes?

It’s a lot different actually, the Subs are more blues based whereas SNFU are a lot faster with more of a metal vibe going on in places. They’re somewhat different personally too though – the subs are kinda reserved, they like their comforts like hotels, nice wines, smelly cheeses and all that shit, whereas SNFU consist of a blind nudist, a deaf alcoholic, a one legged former crack addict and a toothless Chinese faggot (his words, not mine). I think the only fucked up thing about me is that I’m English.

Q) You’ve not toured NZ with SNFU before, but you’re no stranger to New Zealand shores right?

Yeah this will be my third time in NZ I believe, my previous two visits with UK Subs. I’m super excited about it.

Q) What are you most looking forward to seeing or doing? I heard you did a bungee jump last time you were here.

Well, playing drums in a kick arse band is always at the top of my list, but getting to see my friends out there is gonna be fun. I’ll be sticking around for a week after the tour so I was thinking about skydiving this time. Practicing my Kiwi accent should be fun too. Chur chur bro, sweet as ao, why don’t you cam over and set on me deck? What time is it? It’s tin da sex.

Q) Any memories that stand out from those Uk Subs tours? I hear you like to meet the locals and party?

Yeah loads! Turning down blowies from desperate mums with moustaches, hitting the drag bars in Auckland after playing circle of death on Easter weekend where everything closes because of the god damn Christians and their bullshit rules, I also got tattooed in Christchurch so New Zealand will always remain in my memory. But I think the thing that I remember most is how amazing the people are, except the assholes. Fuck those guys.

Q) New Zealand pies and fishing are good? Or is that a Charlie Harper thing?

That’s more of a Charlie Harper thing for sure. I’ve been fishing in Australia and New Zealand before and even though I enjoyed the novelty of it, these days I find the guilt that comes from dragging an animal out of its natural habitat and watching it suffer for the amount of time it takes you to pull out the hook that you just stuck in its gob is inescapable, so generally I just don’t bother. The pies though, nom nom nom!!

Q) So, with SNFU in Canada, and the UK Subs in England, It must take some organising to do everything right?

It does yeah, although I’m far from being the most organised person in the world, that’s for sure. For me, and this is different for everybody, I get by just by maintaining regular contact with everyone I work with through friendship and keeping everyone in the loop about my movements so there are no double bookings. Inevitably there’s going to be the odd mistake here and there due to miscommunication, but it doesn’t happen very often. It helps that I work with other likeminded professionals though, who also like to get things done.

Q) Do you actually ever have rehearsals? Or do you learn everything before you fly out to the shows?

It really depends on who I’m playing for. A lot of the time I learn songs on the way to the gig if I’m playing for someone last minute or whatever. SNFU like to rehearse as much as possible before tours, whereas UK Subs never rehearse. The Izuna Drop rehearse in huge blocks and sometimes I’ll be drumming for 14 hours straight with them, which is pretty intense considering the nature of the music. But one thing I’ve always been great at is quickly learning and remembering songs. I actually think I’m better at that than I am at drumming. So generally I don’t have a lot of homework to do.

Q) How do you find time for everything?

Well it’s really, really exhausting. I have to give maximum respect to anyone who is pursuing a career in being a musician, especially in a punk band, because to do this job you have to be able to get up and give, no matter what. You don’t call in sick because you’ve got the shits and you don’t book time off with paid holiday. You’re constantly immersed in tumbling settings. You go to bed at 5am and get up at 7am with a killer hangover and set off on an 18 hour drive to the butt fuck middle of nowhere to perform for people that want you to act as though you’re down to party with them for the next 3 days straight, instead of being the grumpy tired bastard that you really are. For them it’s one night out, but for you, you’ve been doing it every single night for weeks. And if you’re not actually driving you’re sat in the back of the van updating websites and social media accounts, mobile apps, contacting venues and promoters, dealing with guest list blaggers, friends and fans who can’t be bothered to check your tour dates so they write to you asking you to send them information. There’s accounting, ordering merchandise, backdrops, transportation, interviews, video editing if you choose to go down that route as I do. Lovers, haters, all kinds of shit. Playing music, at least at the kind of level I’m at, is only a very small part of it. But you know what? I wouldn’t have it any other way. I love my job, I love the people I work with and I love my life as a drummer, which is why I do it. I’m sure it’s really fucking bad for my health though, as well as my sanity!!!

Q) Getting back to SNFU, how do you find working with such a creative genius as Chi Pig? Did he take some getting used to or did you click right away?

Being on tour with Chi is actually quite like going on tour with a puppy because you find yourself constantly looking out for him even when he doesn’t need it. We’re talking about a gay cross dressing Chinaman here and some members of the public with a certain undesirable disposition would take great pleasure in kicking the shit out of him for being so. He’s also quite frail these days and most people want to be close to him, often jumping up onstage and leaning on him as they yank his mic away from him to yell the song lyrics down it, and sometimes they inadvertently hurt him. So you just have to keep an eye out for stuff like that. Personally though he’s great. He likes me because I’m mellow, I like him because he’s true to himself and the stuff he comes out with is hilarious. We get on great.

Q) What can New Zealanders look forward to at an SNFU show?

Getting their asses rocked by a bunch of ageing punk rockers hopefully, and sharing the experience with other likeminded people.

Q) Thanks for your time. Any last words?

I just want to thank everyone for their continual support. Even though they aren’t directly supporting me myself because I’m nobody, their support to the bands I drum for keeps me working, travelling and meeting fantastic people whose individual outlooks keep me positive and open minded. So I just have to say thank you. I’d also urge people to support Tim Edwards (Punk Rock Road Trips), who works his bollocks off to bring bands to New Zealand from around the world, often at his own expense. Without people like him, punk rock really would be dead. 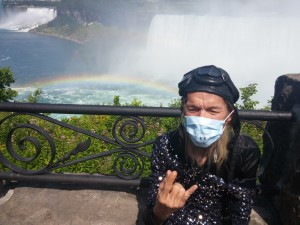