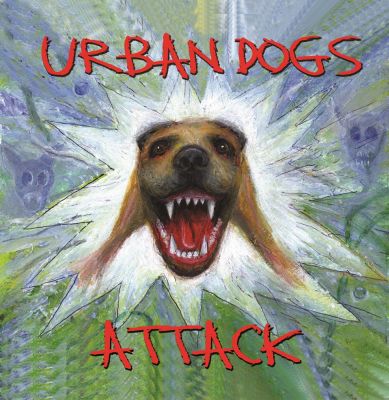 The superb brand new album by the Urban Dogs, 'Attack', out now on Time & Matter Records gets a superb review on the ever superb NUZZ PROWLING WOLF blogsite...

"Attack, The Urban Dogs fifth album is a real feast. A beautifully crafted and constructed twelve track masterpiece that defies  musical categorization...
Stand out tracks? all of them, there's no sitting down here!"

T&M have archived the review below...

Attack, The Urban Dogs fifth album is a real feast. A beautifully crafted and constructed twelve track (Ten originals and a couple of covers) masterpiece that defies  musical categorization; chunks of Punk, Garage, Rock, R'n'B and Psychedelia have been fed into the Urban Dogs musical blender and produced a collection of songs that really are Another Kind of Blues.

The genre busting sound of Attack is down to the three distinct and different styles of song writing and singing of Knox, Charlie Harper and Alvin Gibbs and their collective influences, mustn't forget Drummer Mathew Best who provides a solid beat from the back..  the Urban Dogs are greater than the sum of their parts.

All over the album guitars bleed and cry harmonicas wail and the rhythm throbs. The sound is menacing the pace is at times fast and hard and at others slow and smouldering. Stand out tracks? all of them, there's no sitting down here!

We are Machines is a haunting unholy hum, a dark and intense short circuit of a song that burns slowly into yer skull. Goddamn Liar, a vicious vitriolic attack on all politicians by Bass, Guitar and Drums....Crash, Bang, Wallop!

Then there's Pawnshop Special a harmonica driven fucked up Faces boogie. Storm of Golgotha Tonight throbs and pulses, while the recent single Trick Or Treat is a sinister spaced out strum about.

The cover of Johnny Thunders You Can't Put Your Arms Around a Memory tears away the tenderness from the bone leaving behind a beefed up beast of a tune with added punk rock Hammond organ that bares only a passing resemblance to the original, this is a good thing....Total Punk Rock!

Even the standard RnB fodder of I'm Not Your Steppin' Stone sounds fresh and rejuvenated in the hands of the Urban Dogs and their 21st Century Blues. Attack is available over at Time and MatterRecordings.