22/6/1979
The band were scheduled to play at the Glastonbury Festival. However, they decided at the last moment to pull out and, as they left the concert area, the police pulled them over while a crew from Sounds were taking photos.

One of these photos was used for the band's one and only major music press front cover on 30 June 1979, which appeared with the headline 'UK SUS'.

"The Stranglehold tour started on June 11th 1979. Scheduled for the 22nd was an appearance at the Glastonbury Fair. When we arrived it was awash with the unwashed, with maybe a couple of punks in their midst. We decide to cut our losses and left. As we left the concert area the cops pulled us over while a crew from Sounds magazine were snapping photos. This gave us our first (And only) front cover of Sounds 30th June 1979. There were no arrests, but someone did manage to stick a UK Subs sticker on the back of the Police van." 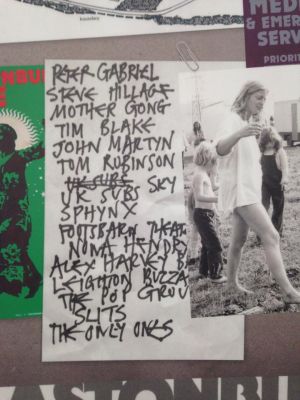 If you have any other information to add to the above entry then please contact us:

Full credit will be given to you for your contribution to our U.K. Subs chronology.